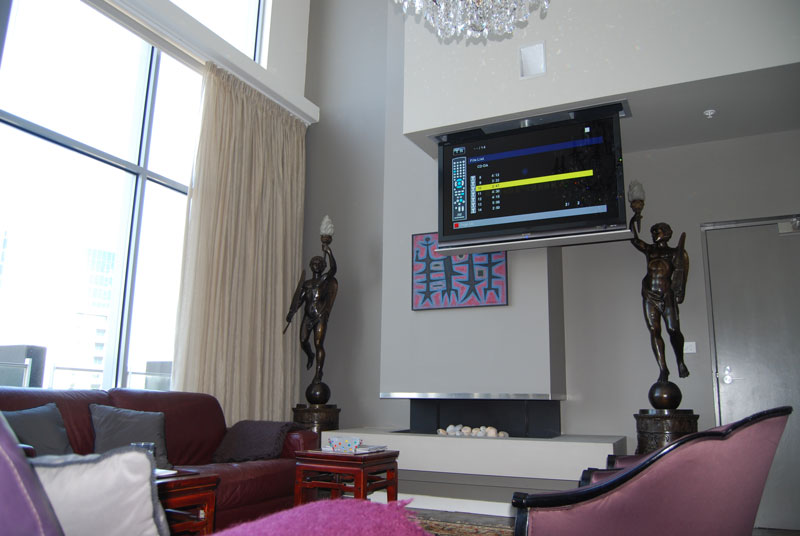 Australians are increasingly living in higher-density areas and, according to the Australian Bureau of Statistics (ABS), there are now more apartments being built than houses, with 1,214,360 occupied apartments nationwide. Apartment buildings are supplying more living space within a smaller footprint in popular, urban locations and can also offer easier cleaning and maintenance. With smaller living spaces, the trend for ‘decluttering’ has grown and many residents are keen to cut down on objects that take up valuable space but aren’t used all the time. While the apartment lifestyle is becoming more attractive, it also means finding ways to maximise the available space for relaxing and entertaining by carefully choosing must-have furniture and appliances, including a home entertainment system.

On average, Australians watch just over two and a half hours of broadcast TV each day, so it’s still likely to be a big part of daily life for apartment residents. However they might not want a large TV set to dominate their limited living space and sit gathering dust when it’s not in use, especially if they have invested in furniture and décor to make the space their own. Motorized TV lifts can save space in apartments, delivering an elegant solution with an automated mechanism which allows users to lift, mount or stow away the television when the space is needed.

A range of innovative systems allow residents to easily conceal their TV equipment in cabinetry that can be used as a table or bench. The TV can also be stowed within the ceiling or walls of their apartment or even behind a painting. As part of a modern, sleek and streamlined aesthetic, TV lifts are an attractive feature for both renters and buyers which can add significant value. The opportunity to artfully conceal the TV instantly makes any room a versatile, multifunctional space to suit constantly changing needs and uses.

Another aspect of this lifestyle that encourages Australians to make their home in an apartment is the stunning views that high-rise buildings often provide. The windows are also a key deciding factor for renters and buyers in that the quality of good natural light will make a room appear more spacious and inviting. According to the Victorian Government’s Better Apartments report, apartment residents rated an airy space with natural daylight as the most important amenity. Having often paid a premium for breath-taking, uninterrupted views and a light-filled living space, they won’t want to park a large TV set in front of large windows. With a simple solution like a TV lift, residents can store away the TV when it’s not needed, allowing them to let light to stream in and enjoy their views out.

There’s also a health and safety aspect to concealing equipment with a TV lift, especially for families who have chosen the apartment lifestyle. According to the ABS, nearly nine per cent of Australian children under four live in an apartment and, for parents, the fear of active kids knocking over a large entertainment unit is never far away. Even worse is the fear of large equipment falling onto the children themselves. Using motorized TV lifts in apartments can give parents peace of mind by helping to avoid accidents, damages and injuries.

Contact us to learn more about out our ready to install range of solutions for apartment living or request a custom quotation for your space!

How to keep TV screens safe and secure outdoors